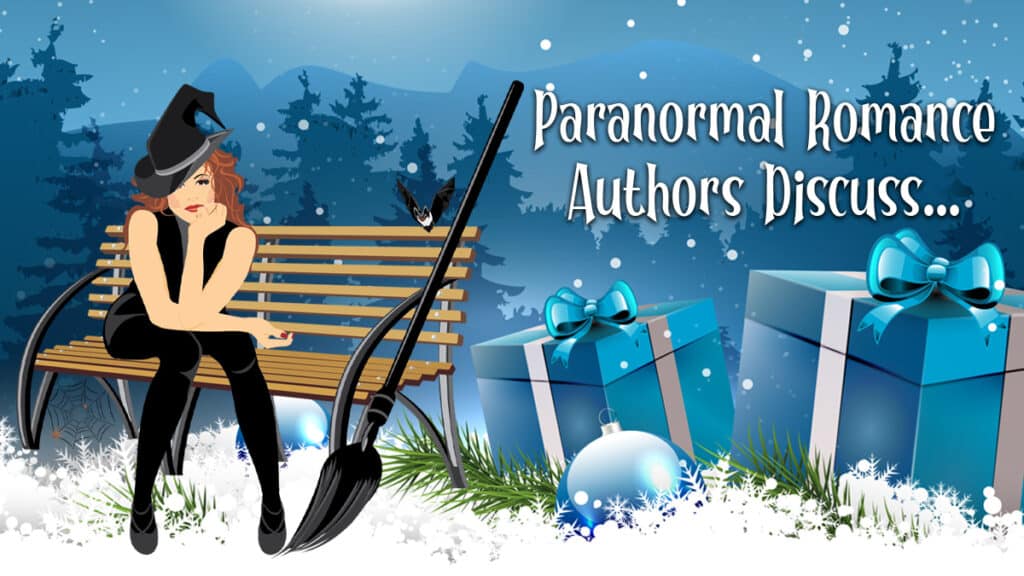 Gift-giving is a time-honored tradition during the holiday season. Some people are great at picking out the perfect presents for everyone on their list, but others… Well, some people just suck at giving gifts, and that’s as true in the fiction world as it is in real life. For this month’s edition of Paranormal Romance Authors Discuss, my friends and I thought we’d hand it over to our characters and let them answer December’s question.

Question for the characters: What’s the worst Christmas gift you’ve ever received?

Hey. I’m Rafe Maccon Alpha Werewolf of the Macconwood Pack. Don’t tell my wife, but the worst Christmas Gift I ever got was this super strong man soap she had special ordered for me. Stuff is made with like a lethal dose of tea tree oil which with my sensitive senses makes me sneeze like a sonovabitch. I use the damn soap daily cause she thinks I love it and I heard her mention she was going to try another scent for my birthday. You gotta help me! Someone tell Charley is much rather have socks or underwear! You know, guy stuff! Seriously, I would do anything for my mate. Even smell like a koala bear’s asshole. Thanks. ~Rafe Maccon from Charley’s Christmas Wolf by C.D. Gorri

A Sephora gift card. Love you mom, but really? Of course, you didn’t know it back then, but I asked for cash so I could get my first tattoo. You did your best to help me feel comfortable in my own skin, though, and that’s what matters most. Turns out, all I needed for that was a frustratingly persistent yet irresistibly charming man with a British accent instead of lip gloss. Speaking of Leo, Kathleen has inherited her father’s charm in spades. Willa, on the other hand, is all me. Was I really that disgruntled as a child? Don’t answer that. I bet she could use a gift card to Sephora from Grandma this year. It’ll be the best worst Christmas present ever. ~Liz Johnson from The Business of Love by Kerri Keberly

The absolute worst Christmas present I ever got was when I was twelve years old and my grandma “gifted” me with cotillion classes. Imagine being in junior high and being told you have to attend etiquette classes and that was the only present you were getting! I feigned appreciation, all the while hoping she’d say she was kidding and give me a skateboard instead. Nope. I got to learn how to “behave like a lady” and “show some manners”. Of course, if I’d paid more attention in class, maybe I wouldn’t be in the pickle I’m in with the supernatural government of Louisiana right now. Oh, well. Grannie tried her best! ~Jane Anderson from License to Bite by Carrie Pulkinen.

I was born and raised in the town of Mystic, but as an adult I ventured out looking for my mate. The town itself was small enough that I realized that there was no one for me within its limits. Taking a job in a town nearby was a means to an end. I didn’t need the money, but it gave me a chance to meet nearly everyone in town. That’s where I received the best and worst gift of my life. I met ‘her.’ A little boy had become separated from his mother and I took him in hand and offered to help him find his mother. It didn’t take more than a minute or two. I could hear her clear across the store, searching. When she saw her son she broke down in tears and hugged him within an inch of his life. I felt the same as her son. My lungs locked up, my heart thundered in my chest, trying to beat its way out. It took everything I had in me not to take the both of them and run straight back to Mystic. I saw the ring on her finger. I saw the truth of my situation in that moment. My mate was someone else’s wife. She had two cubs of her own. I had lost her before I had found her. I had my gift… but I couldn’t claim her… not for years and years. ~Aaron Winter from Winter by Reina Torres

My mother remarried a few years ago – to a centaur, by the way, and if you know anything at all about those half-horse’s asses, you know what I mean when I follow this statement with a giant eye roll. Anyway, her new hubby Chiro thought we should all get together for Christmas, even though Mom and I are witches and don’t celebrate, plus, do centaurs even care about Santa Claus? At any rate, yes, I went to this dysfunctional family gathering, mostly because Mom is the awesomest gift-giver ever, and I had been dropping major hints about those super sexy high-heeled boots I’ve had my eye on since boot season started. Turns out, I should have declined the invite. Why? Because Mom wasn’t in charge of giving gifts this year. And Chiro decided that what I really needed for Christmas was to be cut off from my trust fund, because he decided I wasn’t doing enough with my life, and I needed to start working for a living. That’s right. And you know how I’m going to get him back? I’m going to date a freaking demon. That’ll show him. ~Clarissa Andrews from The Demon You Love by Tami Lund   </br

The worst Christmas present I’ve ever gotten came from my mother, believe it or not. I’m an artsy person, I mean, I’m a professional photographer! In her never-ending attempts to keep me from connecting with nature, she bought me a series of books on computer coding when I was a senior in high school. I know how to use a computer, but nothing deeper, and I’m honestly completely alright with that. I tried reading them to make her happy, desperate for the approval that never came, but it wasn’t too long before I got so bored I couldn’t take it anymore and donated them to a local shelter. All those letters made my eyes cross. Now knowing what I do about both of my parents, I think I made the right choice sticking with art and nature! ~Clarissa (Clari) Wakanda from Entering Wildwood by Ellie Winter

For my 348th Christmas, Father Grégoire gave me a puppy. A tiny living thing. For me—the freakin’ monster. Merde! What was he thinking? Since Valerian find solace in his black Lab Sasha, maybe F.G. thought I’d be the same. That my heart would melt for a cute pet. But I’m not the same, dammit. I don’t have a soul. Nothing like the St-Amand brothers. I’m cursed. I don’t feel things like they do. And if do, well, it’s none of anyone’s business. I’m happy like this. Truly! Still got my 18 years old bod, got the Montreal nightlife at my feet. No place for anything else in my life. So I named the tiny Cokapoo Marianne— after my long departed mother, god bless her soul. Then gave the thing to the old Madame Ioshta. She’s a witch, always need a familiar around. And no, I don’t miss the tiny animal one bit. Not really, I swear. ~Emmeline Dubois from A Vampire’s Spell by Marie-Claude Bourque

A junior doctor in North Wales, UK, I was exhausted by the Christmas holidays, but I battled heavy snow to spend Christmas with my best friend Marc and his family at the Guardians’ Trust. A bottle of Budweiser and a good chat with friends seemed a promising start to the festive season, but then the back door banged open letting the bitter wind and Maddox in. My Christmas present? The news that I was a Double, one of a pair of identical women born to swap places. According to Maddox, I was destined to cross the gateway through a freezing waterfall and marry a stranger in a jungle realm at war! Needless to say, I was not amused and I felt sure the family I’d adopted as my own were, in fact, a cult with Maddox as its head! There was no way I was buying into their weird religion! But, snowed in, I stayed and I heard the truth of the gateway’s stones. I made my Exchange. In the end my worst Christmas present turned out to be my best: I married Cadell, a man I had a serious case of lust for, we fell in love and after some serious peril (!) we were both gifted the ability to shift into wolves. ~Dr Meri Stevens from The Guardians’ Trust: Meri (book 3) by Beth Linton

So now it’s your turn! What is the worst Christmas gift you ever received?

Secret Circle member commenting before Dec 10th get the bonus of being entered for my Bane’s Choice paperback Giveaway!

“Bourque develops a world of mages and sorceresses unlike any other." —Night Owl Reviews