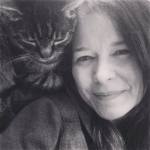 Marie-Claude Bourque is an author of gothic paranormal romance and winner of the American Title with her debut novel ANCIENT WHISPERS.

A French Canadian born in Montreal, she now lives in the Pacific Northwest with her husband of 20 years and their two teenaged sons. While she works full time as a Science teacher, she uses her downtime to write infinitely romantic stories about sorcerers, witches, vampires, shifters and other all sorts of other modern-day mythical creatures.

What was your biggest inspiration for ANCIENT WHISPERS?

I was inspired by a heart-breaking poem called Evangeline, written years ago by Henri Wadsworth Longfellow. It relates the plight of French Acadians who were deported from Canada by English soldiers in the mid seventeen century. Some Acadians ended up in Quebec others in Louisiana (the Cajuns).
In the poem, Gabriel and Evangeline are put on separate ships during the deportation and spend their life looking for each others. I wanted to give Gabriel another chance. So in my story, he becomes immortal and meets Evangeline’s reincarnation in modern time.
I’ve known about this all my life because my grand-father told me how the Bourque family was deported from Port-Royal to Quebec, in the same way as depicted in the poem Evangeline. So the story has stayed with me for decades until I was inspired to reunite these two tragic lovers on paper. In fact, all the sorcerers in ANCIENT WHISPERS are inspired by tragic lovers and I plan to give them all a second chance at happiness.

What is your history with writing contests? Why did you choose to enter the American Title V?

I entered ANCIENT WHISPERS in over 15 RWA contests in the 2008. I got a wide range of scores from 40% to full scores. I never finaled in any but got quite a lot of interesting and useful feedback, yet it’s that same entry that got me into the American Title V contest.

I chose to enter American Title on a whim because I had just prepped my first 3 chapters for a contest and when I saw the call for entry and saw that it was free, I just decided to give it a shot. It was a huge shock for me when Leah Hultenschmidt at Dorchester emailed me to ask for a full.

I think my writing was still pretty rough, this was my first manuscript. So it was not polished enough to pass the judging criterion of RWA contests, but perhaps editors views these entries differently if they see something they can work with and fix. All in all, I think a lot of luck was involved, the right story, at the right time, to the right editor.

Are you a plotter or a pantser?

Do you write to silence, or do you prefer a little noise?

I usually write with music. Music drives the strong imageries that I translate in my writing. I have a playlist for each of my projects. Ancient Whispers was written to Nine Inch Nails and Loreena McKennitt

Tell us about your blend of meteorology, magic, and mysticism.

That is such a difficult question to answer! I am a trained scientist and was raised by scientists. There was not mysticism in my household when I grew up. But I started to be interested in Zen Buddhism and the concept of mindfulness and how we are all interconnected with what is all around us.

That led me to Paganism and a strong connection to how the wheel of the year turns, to the concepts of male and female balanced energies in life and also to women’s mysteries in all our stages in life, such as maiden, mother, crone. That last concept is strongly featured in Ancient Whispers. My story is a love story, but also a young woman’s journey of self-discovery.

I do like to explore both concept of scientific rigor and magic or the unexplained. I think it is fascinating. That is why I want to write about it. I know it is a daring thing to do, but I am up to the challenge!

How do you fuel your creativity?

How do I fuel my creativity? While I love hanging out with friends and chatting a lot, I am actually essentially a loner, maybe because I’m an only child. I need time alone to regroup, usually reading and listening to music. Music really feeds the powerful images that I try to translate into writing. I have a play list for each book I write. I like alternative and heavy rock, or medieval classical music. I read all sort of books, but both dark or high fantasy and some historical novels are what give me the most inspiration in writing. And I’m also a big fantasy and action movie fan. It’s a great way for me to unwind, and some of what I watch will usually spark my imagination.
What tops your Things Every Writer Should Know list?

1- That there is a delete key on the computer. People should just write from the heart and revise later. Very few people write a perfect draft on the first try, so it’s okay to just write as it comes.

2- Write what you love and truly believe in. Because the time will come when you will get criticism, and when that happens, you start doubting yourself. But if you write to please yourself first, you’ll always be happy to have written the story, and you’ll feel that sense of accomplishment no matter what.

3- That writing is work. It’s fun work, it’s magical work. But stories don’t write themselves. You have to put the time and the energy into it. You have to be disciplined and act as if you are a professional writer. When I feel low and start to be lazy, I try to think of what a professional writer would do. They would write, of course. They have deadlines. So, I try to push myself that way.

4- That you don’t have to do this alone. I am amazed at the amount of support there is out there in the writing community, especially in romance. Either online or in Romance Writers of America® local chapters, there are tons of groups where writers gather and share their experience. I couldn’t have gone this far in just a year if I didn’t have this incredible support from people in the writing community.

GET YOUR FREE BOOK!